The Coalition for Free and Fair Elections “Pod lupom” use this opportunity to draw the attention of the public, the Interdepartmental Working Group for Amendments to the Election Legislation, as well as all decision-makers to the fact that there are no legal mechanisms in Bosnia and Herzegovina to prevent the practice of so-called “dual functions” which often leads to a classic conflict of interest

“Dual functions” is the practice in which a candidate in an election for a certain legislative authority is elected to that authority, while at the same time is continuing to perform a previously obtained or appointed function in the executive authority, usually from the previous election term. More specific, it is a situation when, in the case of BiH, a person is elected, e.g., to the House of Representatives of the Parliamentary Assembly of BiH, and at the same time continues to perform the function of Minister in the Council of Ministers.

This practice is problematic for numerous reasons. One of the reasons may be that a person finds himself in a situation of classic conflict of interest i.e., to decide and make decisions about his own results or the work of the ministry he heads. Furthermore, this violates the principle of incompatibility to simultaneously perform the functions in the executive and legislative bodies, which is defined by the Election Law of BiH, which states that this situation is possible only “during the period until the executive bodies of the authorities are constituted during the regular elections in the same election cycle”. What constitutes a problem in these situations is that no regulation has defined a deadline to form the executive authority after implementation of elections, which is leading to a situation that, for example, the executive authority, which was formed after the 2014 Elections, even today is in the technical mandate at the level of the Federation of BiH due to the inability to reach an agreement on the formation of the executive authority after the 2018 Elections.

One would assume this situation can only happen in BiH. But that’s not true. What is characteristic for BiH is that currently there are no legal mechanisms to prevent this phenomenon, which would keep and satisfy the best interests of all involved – primarily the functionality and efficiency of the executive and legislative bodies, and also the interests of directly elected officials directly trusted by voters in the elections to represent their interests.

Who are the bearers of “dual functions” in BiH?

By researching the data pertaining to elected and appointed officials at various levels of government in BiH, the Coalition “Pod lupom” find out that 10 bearers of “dual functions”  currently simultaneously performing the function they have been directly elected in the 2018 General Elections, while simultaneously holding a position at one of the levels of executive authority, which was not formed after the 2018 General Elections but is functioning in a “technical mandate” since the 2014-2018 election cycle.

Bearers of “dual functions” are as follows: 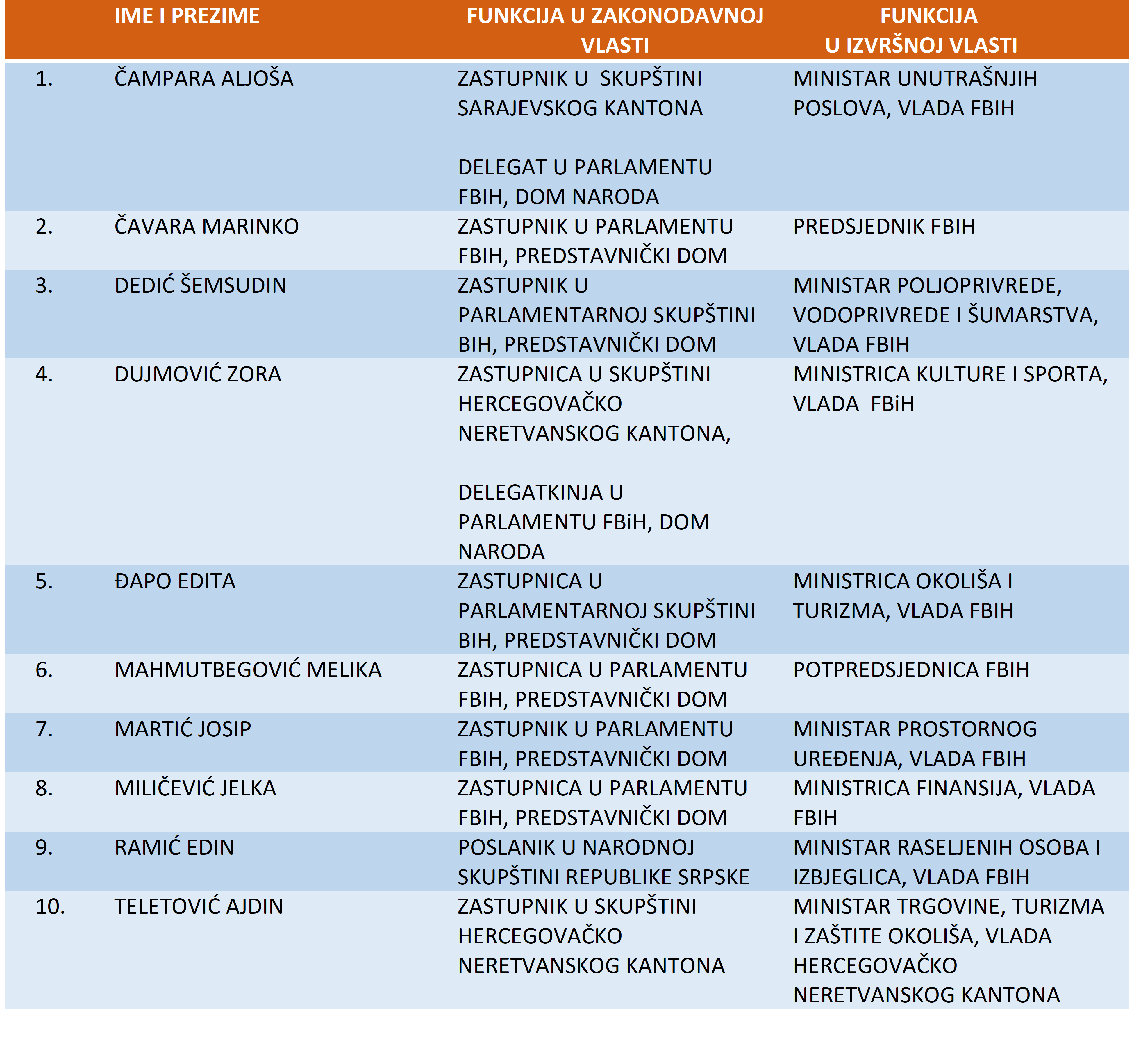 At the same time, the Coalition “Pod lupom” asked the Central Election Commission of BiH (CEC BiH) for an opinion on whether such parallel performance of functions, in 10 cases, violates the Election Law of BiH, and whether the CEC BiH received reports to proceed some of the above-mentioned cases and what was the decision of CEC BiH on those proceedings. The CEC BiH confirmed that the simultaneous performance of the above-mentioned functions is not in conflict with the current provisions of the Election Law of BiH, given that in specific cases the executive authorities, at the level of the FBiH and Herzegovina-Neretva Canton, were not constituted after the 2018 General Elections.

The CEC BiH confirmed to the Coalition “Pod lupom” that it had received a request to initiate proceedings to determine the responsibility of Aljoša Čampara for violating the provisions of the Law on Conflict of Interest in the FBiH authorities as well as the Article 1.8. of the Election Law of BiH, however, this request was rejected due to being filed by an unauthorized person.

How can we prevent the performance of “dual functions”?

In the meantime, the next candidate on the list of candidates from the list of candidates of the same political entity from the same constituency is replaced in place of that elected person, and that person practically replaces the originally elected person as long as he/she holds executive office. After the termination of the executive function, the originally elected person can “activate” his/her mandate in the legislative authority for which he/she was elected in direct elections.

The institute of “a replacing mandate” seems to be a good balance for both, the protection of public interest as well as the interest of voters to be represented by representative whom they directly elected. The existence of such an institute is not unusual in election legislation, and perhaps the nearest example can be found in neighboring Croatia where the existence of “a replacing representative” is prescribed by the Law on Elections of Representatives to the Croatian Parliament, and where this possibility is provided due to incompatibility to simultaneously perform executive and legislative functions.